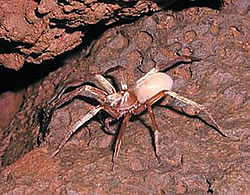 Endangered Kaua’i Cave Wolf Spider. Known only to occur at caves with an area of 10.5 square kilometres at Maha’ulepu.

Hawaii Dairy Farms (HDF), a large Dairy proposed for the South Shore of Kaua’i, would be owned and operated by the “for profit” side of Ulu’pono Initiative, a venture capital investment firm of billionaire, Pierre Omidyar.